How We Get Stuck

As we’ve discussed, the greatest motivator we have is progress.

It’s even more frustrating when we stop making progress, and we have no idea why.

In the last episode of the Laws of Brainjo, I reviewed the differences between the “hard” and “soft” skills of banjo playing. Both of these can lead to the dreaded state of stuckness.

(NOTE: if you don’t recall that episode well, it might be good to read it first. Click here to do so.)

But the way in which the hard and soft skills cause us to get stuck is very different. And for those who want to unstuck themselves, it’s crucial to know that difference!

Hard skills are what we usually think of as the technical aspects of banjo playing (“hard” in this case does not refer to level of difficulty). And we generally know what those skills are. In the pie of possible knowledge, we can divide the hard skills we’ve acquired at any given point in time into the skills we know that we know, and the skills that we know we don’t know.

Here again is our pie of possible banjo knowledge I introduced in the last episode: 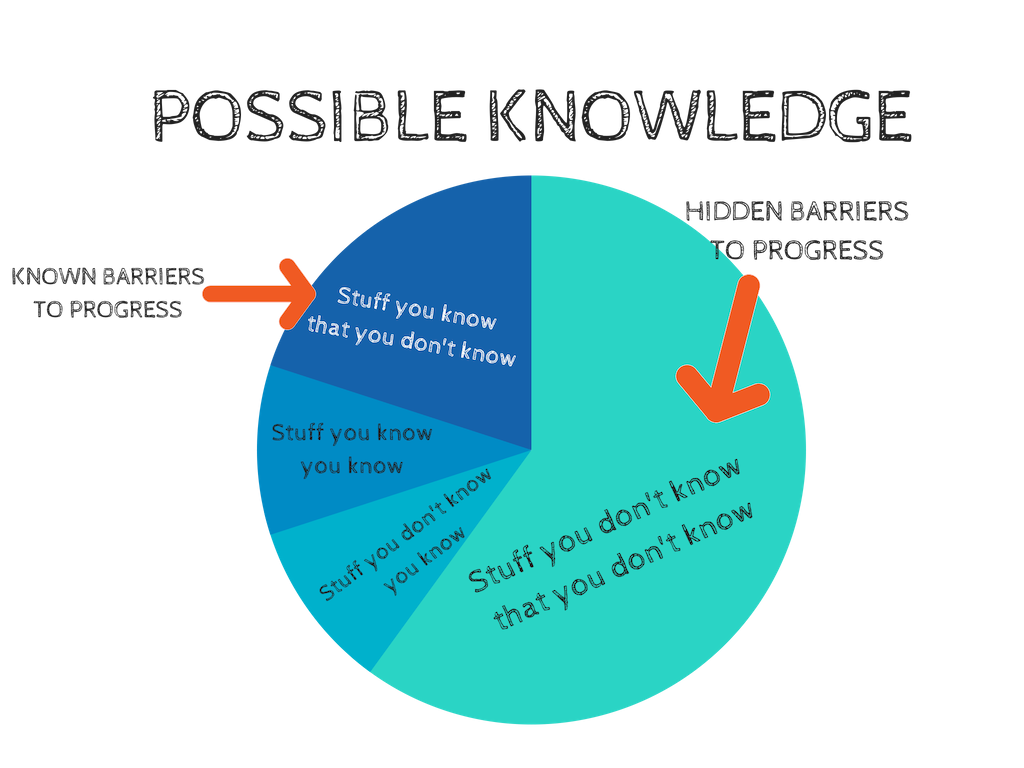 And it almost always results from the early formation of bad habits, which can come from learning the hard skills in the wrong sequence, at the wrong times, or in the wrong way.

As we’ve covered before, it’s much easier to form good habits from the start than it is to break a bad one that’s already formed (one of the central objectives of the Brainjo Method is to carefully map out this process – not just what to learn, but HOW to go about learning it.).

So what are the hard skills of banjo playing? We can basically divide these according to the mechanical  skills required of each hand:

Bimanual Hard Skills: Coordination of the various combinations of the above picking and fretting skills.

So, in essence, the hard skills consist of an array of basic movement patterns that must be first learned by each hand, and then combined and coordinated in all manner of ways, in time, at will.

Once all of those movement patterns and the neural networks that control them have been created, however, we still must know how and when to apply them. They do us no good if we don’t understand how to use them make the music we want to make.

And that’s where the “soft” skills come in.

The soft skills are like “advisors” to the motor system, or the conductors of the orchestra. They formulate the plans for how to use those hard won “hard” skills in the service of music making.

It’s in the mastery soft skills that separates the most extraordinary from the ordinary musicians, the ones who make us rush out to buy their albums, want to learn how to play like them, or move us to jubilation or tears.

Even though computer generated music is more technically perfect than anything a human can achieve, we still prefer music made by machines of flesh and sinew over metal and transistors. Why? Because we have yet to figure out how to teach a computer the soft skills.

And, as mentioned, soft skills are the other source of stuckness. In fact, they’re oftentimes an insidious, invisible cause of stuckness.

And we can’t learn what we don’t know to learn, right? So if you’re stuck and you don’t quite know why, chances are it’s because of a soft skill.

Moreover, how to go about learning soft skills, even when we have some notion of what they are, is less clear.

How do you know how the difference between a sad, happy, puzzled, surprised, angry, jealous, indignant, or constipated face?

How do you know the many ways in which tone of voice can completely change the meaning of a single word?

These are but some of the soft skills of human communication and social interactions. And the list goes on and on.

Yet, do you recall ever sitting down to study, or take a class on any of these things?

Of course you didn’t. Somehow, your brain just figured it all out. And this is no ordinary feat, mind you, as exemplified by the fact that we’ve yet to program a computer that can do any of these things nearly as well as a regular human’s brain.

And to figure these sorts of things out, your brain first had to know that figuring it out was important. In other words, you first had to care about things like proper social behavior in various situations, or interpreting human emotions through expression and tone of voice.

Fortunately, we come wired up out of the box to care about such things, as communicating with each other has been the key to the success of our species.

But the point being that the learning of all those soft skills itself happened subconsciously, in all that neural machinery that runs in the background. That’s where the smartest parts of you live, and those parts are always on.

Likewise, when it comes to the soft skills of banjo playing, in many instances the key is knowing what to care about, and then seeking out the appropriate inputs so that those subterranean circuits can do their thing.

So, then, what are the “soft” skills of banjo playing?

Here’s a list of some of the most significant ones – note that these are specific for players in an “aural” tradition (one transmitted and learned largely by ear, which comprises most musical traditions outside of classical music, where learning is by rote):

Much of these can be learned through a combination of reading (to create awareness and understanding of certain theoretical concepts, where needed), listening, and jamming (playing with other musicians or backing tracks, in order to apply these concepts and generate feedback).

So if you’re stuck, ask yourself, do I know why I’m stuck or not?

If it’s because of a hard skill that you’ve habituated poorly, you may have go suck it up and take some steps backwards before you can go forwards again.

If it’s a soft skill, consider which of these elements you may be missing (it also helps to try to precisely define your goals – i.e. what are you NOT able to do now that you wish you could).