Episode 1: “Will the Circle Be Unbroken”

The calendrically oriented among you will note that we recently ushered in a new year. And a new year means a new season in the Core Repertoire Series!

Up until this point we’ve focused exclusively on tunes, or “instrumentals.” Just the banjo played all by its lonesome.

And while there’s definitely a place for solo numbers in every player’s repertoire, there’s also a place for music that’s to be played AND sung. Playing and singing with the banjo is a big part of the tradition.

Clawhammer style itself is tailor made for vocal backup, yet ironically the trend in recent years has been for FEWER clawhammerists to play and sing.

That needs to change. In fact, I’m making it a personal mission to get more folks playing and singing!

And in case any you out there are skeptical, or apprehensive, about the prospect of playing and singing, let me lay out a few of the benefits of doing so.

The Benefits Of Playing And Singing

Benefit #1: It’s fun. It’s hard to beat belting out a tune at the top of your lungs while you’re hands busy slapping the strings in rhythm.

Benefit #2: You can beat the livin‘ snot out of your banjo, and it still sounds awesome. Listen to Stringbean. He’s assaulting that banjo! And it sounds flippin‘ fantastic. In fact, if he played delicate and timidly, it wouldn’t sound nearly so good.

Benefit #3: The “Dale Carnegie Effect” – you’ll win friends and influence people. Outside of a select few die hard fans of the banjo, most folks couldn’t care less about listening to all instrumental tunes on the banjo. But play AND sing, and suddenly you’ll have their rapt attention. You could spend years working on a 5 part version of Forked Deer replete with every technical flourish in the book, and most folks won’t bat an eye. But if you just play the simplest of songs, they’ll enjoy it, and they’ll think you’re AMAZING. People respond to other people’s voice, it’s just how we’re wired up. So, if you ever want to entertain friends, family, or a larger audience, having a repertoire of songs is a must.

Benefit #4: It’s good for you. Not in the eating spinach kind of you. It’s good for you in the sense that learning to do it will help you grow as a musician, even if you don’t have much desire to play and sing. Many of the greatest banjoists of all time were also great singers, and I don’t think that’s a coincidence. When you learn this, there are aspects of it that will spill over into other parts of your playing. You’ll also have a much better understanding of how to play the banjo when OTHERS are singing as well, which is very useful in a jam or band situation.

Benefit #5: It’s easier than you think. It may be hard at first. Like everything. Until it’s not, then it’s easy. Bottom line, it can be learned.

Convinced? Of course you are.

Those of you who’ve been following along with the Core Repertoire Series will note that we’ll be approaching things a bit differently here than we have when learning tunes.

For starters, we’ll be creating an arrangement for what we’re going to play while we sing. So we’ll be trying to find something to play that supports our voice. Sometimes less is more (though it’ll still sound like you’re doing a lot).

I typically also play a lead solo break, as I do in this video, whenever I play and sing something, but the lead break can be created using the same arrangement building procedure we’ve used in prior episodes (if you’re interested in lead arrangements, I have an ever-expanding library of arrangements for songs and tunes, with both vocal and lead backup, inside of The Vault, which is part of the Breakthrough Banjo course (click for details)).

Not so when you sing.

What you’re essentially doing when you’re playing backup behind your voice is harmonizing with the melody you’re singing. And what defines what harmony should be played behind the melody? The chord progression.

If you’re not accustomed to picking out the chords for a song, rest easy. It’s something that can be learned.

So knowing the chords is a must if you’re going to play and sing, and one of the best ways to learn a new song is to start by learning the chord progression, as that’s the template you’ll use for your vocal backup.

Step 1 remains the same. Even though knowing the chord progression is important, you still need the melody to figure it out.

Now, one thing I think you’ll find in this series is that the melody of a song is a LOT easier to remember than the melody of a tune. One reason is because the melody tends to not be quite so notey. It’s a trivial matter on the fiddle to cram a bunch of notes into a single measure; not so much for the human voice, nor does it sound all that great.

Another reasons is that it takes advantage of that big hunk of brain devoted to talking. It’s simply easier to remember a melody when you attach words to it, thanks to how we’re wired up.

Here’s me singing “Will the Circle Be Unbroken”, so you can stick it inside your noodle:

Listen enough times till you’ve got it. Don’t move on to step 2 until you can sing it to yourself. Here are the words to the refrain (which has the same melody as the verse) so you can practice: This song has a nice straightforward chord progression, which is: The simplest thing you could do would be to strum across the strings while you sing, holding down the appropriate chord of the moment as you do. But since this is about playing and singing clawhammer style, let’s make it sound clawhammer-y.

So, the most straightforward thing to do here is finger the chords, and alternate between the 3rd and 4th strings on the “bum” strike.

And, most of the time, we’ll be using the first position chord shapes, since those make use of the lower tones of the banjo which a) are easier to play and b) sound best behind the voice. That sounds like this: 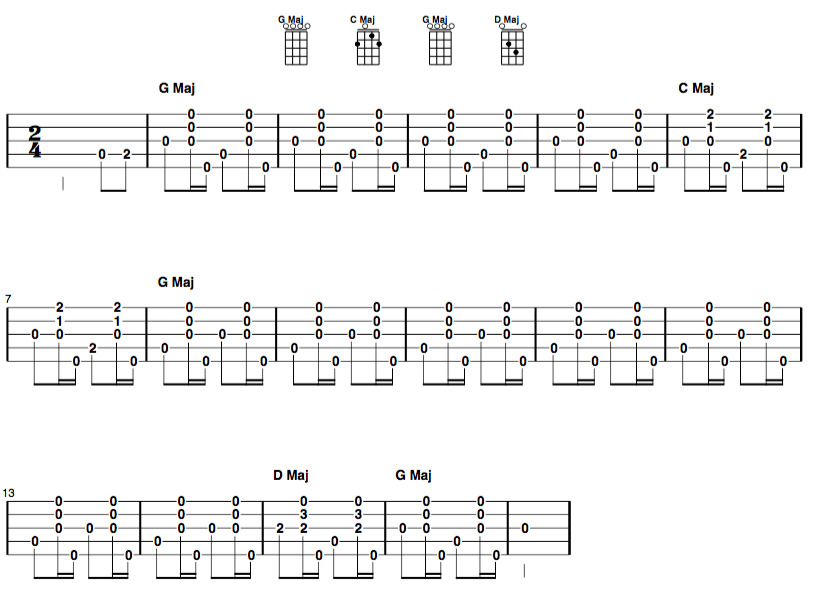 You may notice that the D chord if indicated is a “partial” D chord (rather then the fully fingered D chord). I like this shape for vocal backup both for its sound, and because it allows you to access the low D string on the “bum” strike.

If you sing while playing the above, it sounds like this:

Now, what we’ve got already sounds just fine, right? But one thing you can do to spice things up here is double the melody on the banjo when possible. Just remember when doing so to play the melody notes on the banjo at the same time as you’re singing them.

One of the great advantages of knowing the chord progression, and keeping it fingered as you play, is that the melody notes of the song are oftentimes readily accessible. In fact, many of the melody notes will also be chord tones, meaning that playing those melody notes as you sing simply requires you finding the right string to hit.

Take a look at the tab for the melody line for this song: 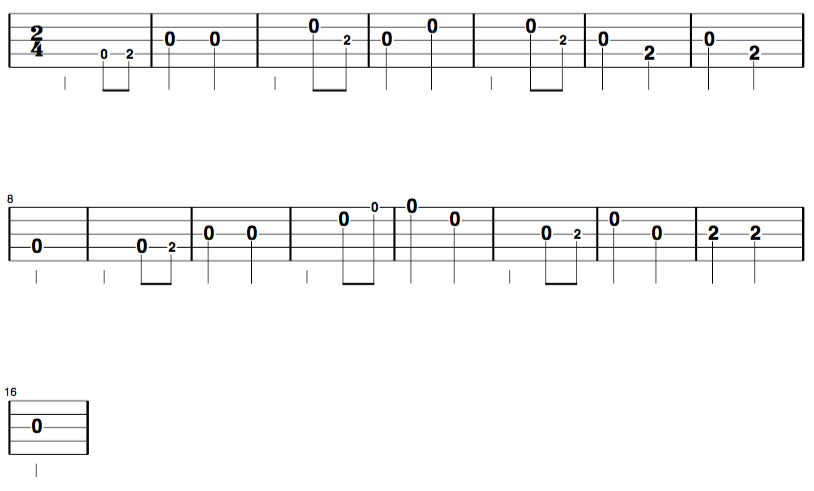 This means that if we want to outline the melody just a bit behind our voice, all we have to do is hold down the chords, and make sure we strike the appropriate string on the “bum” part of our “bum ditty”. Here’s how that looks in tab: 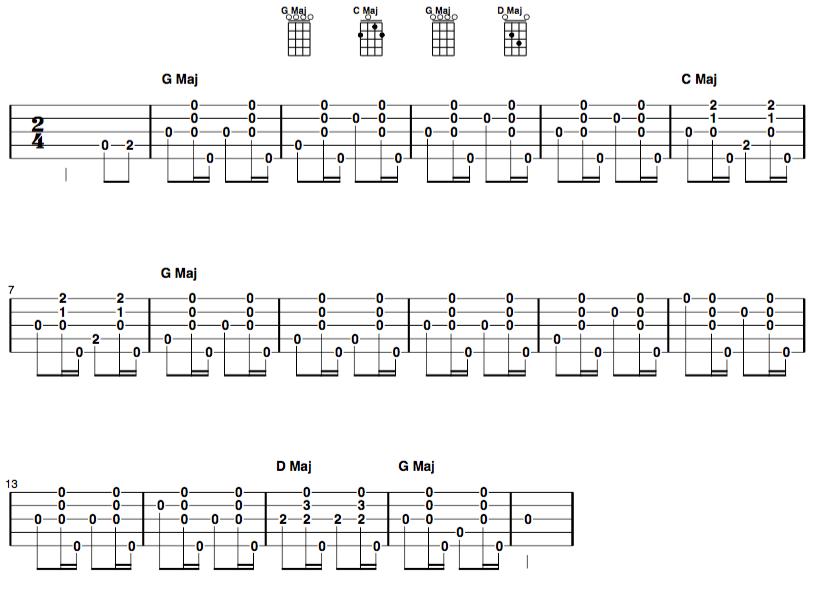 And here’s how that backup version sounds:

If I add my voice with this backup, it sounds like this:

You’ll also notice in songs that there are spaces between the phrases, the places where the singer can take a breath. You’ll keep playing the banjo during these moments of course. You can continue in the bum ditty manner as above, or you can throw in a “vamp” lick for interest. You can see and hear in the video above the sort of things I did to fill the spaces.

From here, you can try to spice things up even more, or just keep it as is. As I said earlier, even with simple vocal backup, there’s a lot going on musically. I’ve added a few additional embellishments in my final version, which you can hear in the video. Here’s what my backup arrangement looks like in tab: 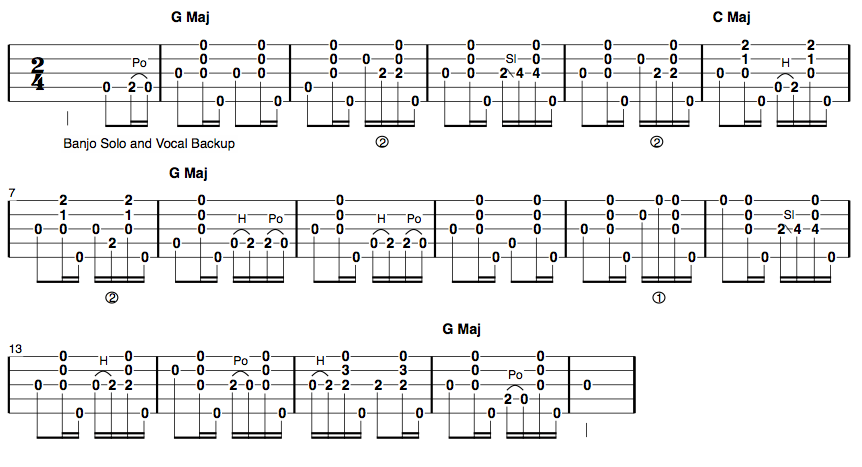 As I said earlier, I typically play a lead solo at least once, sometimes more, whenever I play and sing something. You can hear this in the video above.

As part of my mission to get more folks playing and singing, I’m building an ever-expanding library of arrangements for songs and tunes, with lead and vocal backup arrangements, along with video demos for folks of all abilities inside of the Breakthrough Banjo course.

So, if you’re looking for more material for playing and singing, it might be worth checking out! Click here to learn more.

If you have questions about any of the notation in the tabs, go here for a complete explanation.