Episode 6: The Yellow Rose of Texas

Sign up here to get a downloadable PDF of Episodes 1-15 of the Clawhammer Core Repertoire Series. You’ll also be notified whenever a new episode comes out.
Alright my fellow downpickin‘ brethren, it’s time for S1:E6 of the Clawhammer Core Repertoire Series. Hopefully, you fine folks have worked your way through the previous tunes in the series and are starting to not only build an arsenal of jam-friendly tunes, but are developing your own understanding of the process of creating your own arrangements and putting your personal spin on the music.

Up this week is the “Yellow Rose of Texas”. This one of those old-time tunes that was borrowed from the repository of popular music. According to my internet sources, YROT infiltrated its way into the American folk diaspora (it’s original composer is unknown) somewhere in the early 19th Century.

The “Yellow Rose” here actually refers to a woman, Emily D. West, who helped win the decisive battle in the Texas Revolution. And its melody is one that’s so intimately woven into the fabric of American culture that it seems like it’s been around since forever.

At some point it made it’s way into Appalachia, where, in the hands of southern old-time fiddlers, some subtle melodo-rhythmical were made to make it a little less balladish and a bit more danceable.

They also changed it to a D tune.

Anyhow, enough with the history lesson. Let’s learn this thing.

First things first, we must etch this tune into our memory banks with some repetitive sonic renderings. Here’s a version of the original Yellow Rose of Texas (courtesy of youtube), all mighty and majestic sounding:

And here’s how it sounds in the hands of some fine southern old-time fiddlers:

Since we’re learning the old-time version, we’ll be using the latter two examples to extract the bones of this tune. Listen to them enough times until you can whistle or sing the melody on your own.

Next, get your banjo into “double D” tuning (aDADE) and see if you can pluck out the basic melody notes. Remember, don’t put in any clawhammery stuff just yet. All we need right now is the basic melody, and it should sound something like this: 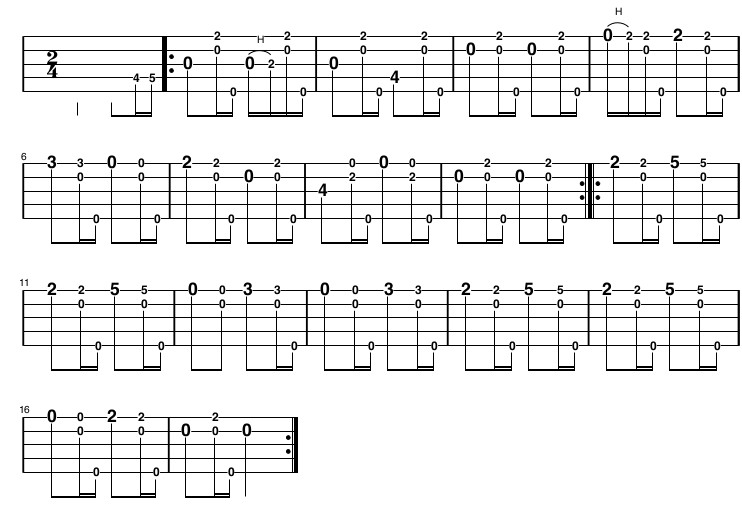 Next, as we’ve done in the past, we’ll throw our basic melody into the bum-ditterizer. The simplest way to do this is to just strike each of the melody notes that fall on a downbeat (the “one” and the “two” counts of each measure) with our frailing finger, and then follow that with a brush stroke. In tab form it looks like this (notice that the notes from our previous tab that occurred on the downbeat are placed in large font):

Step 4: Dress Your Gal Up

At this point, you can dress her up however you please. See if you can throw in a few more melody notes from our initial basic version. Try not to gild the lily, er, rose, too much. After all, she looks pretty good already. Here’s what my own fancified version sounds like:

And this is what it looks like in tab: 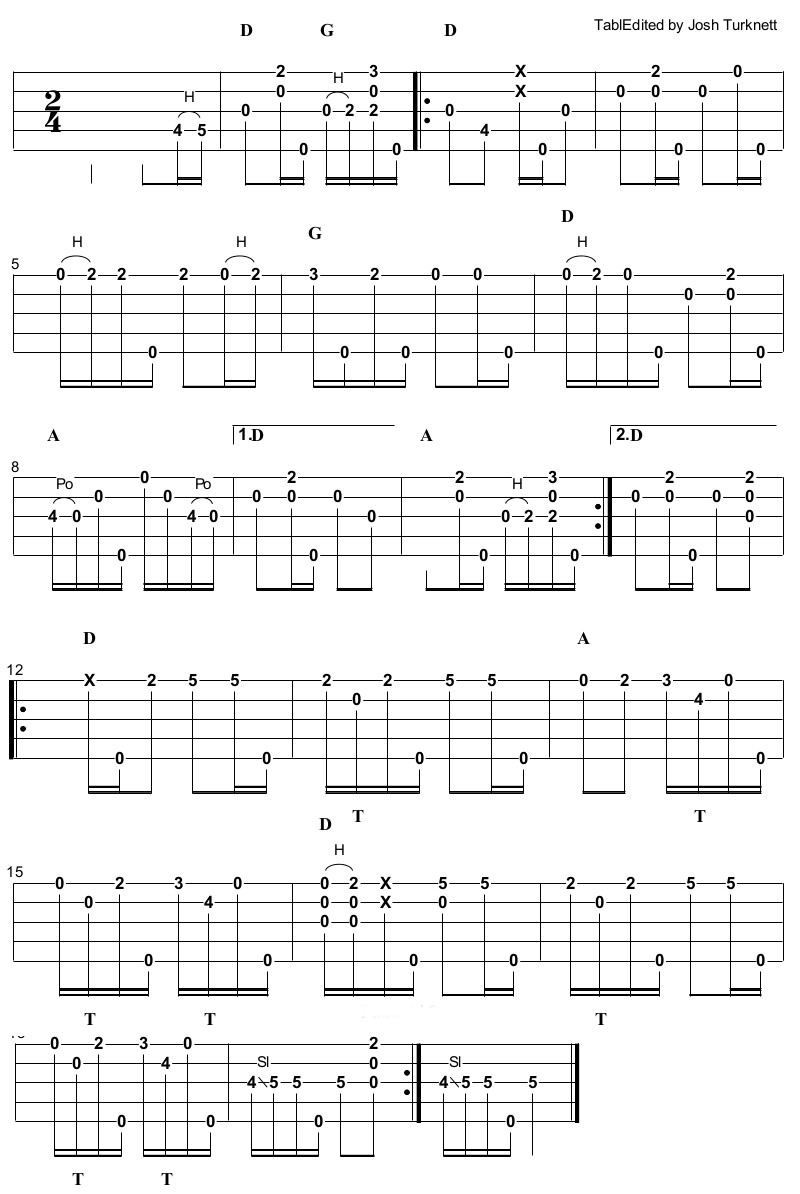 And, last but not least, if we pair my dressed up gal with the fiddle, we get this: